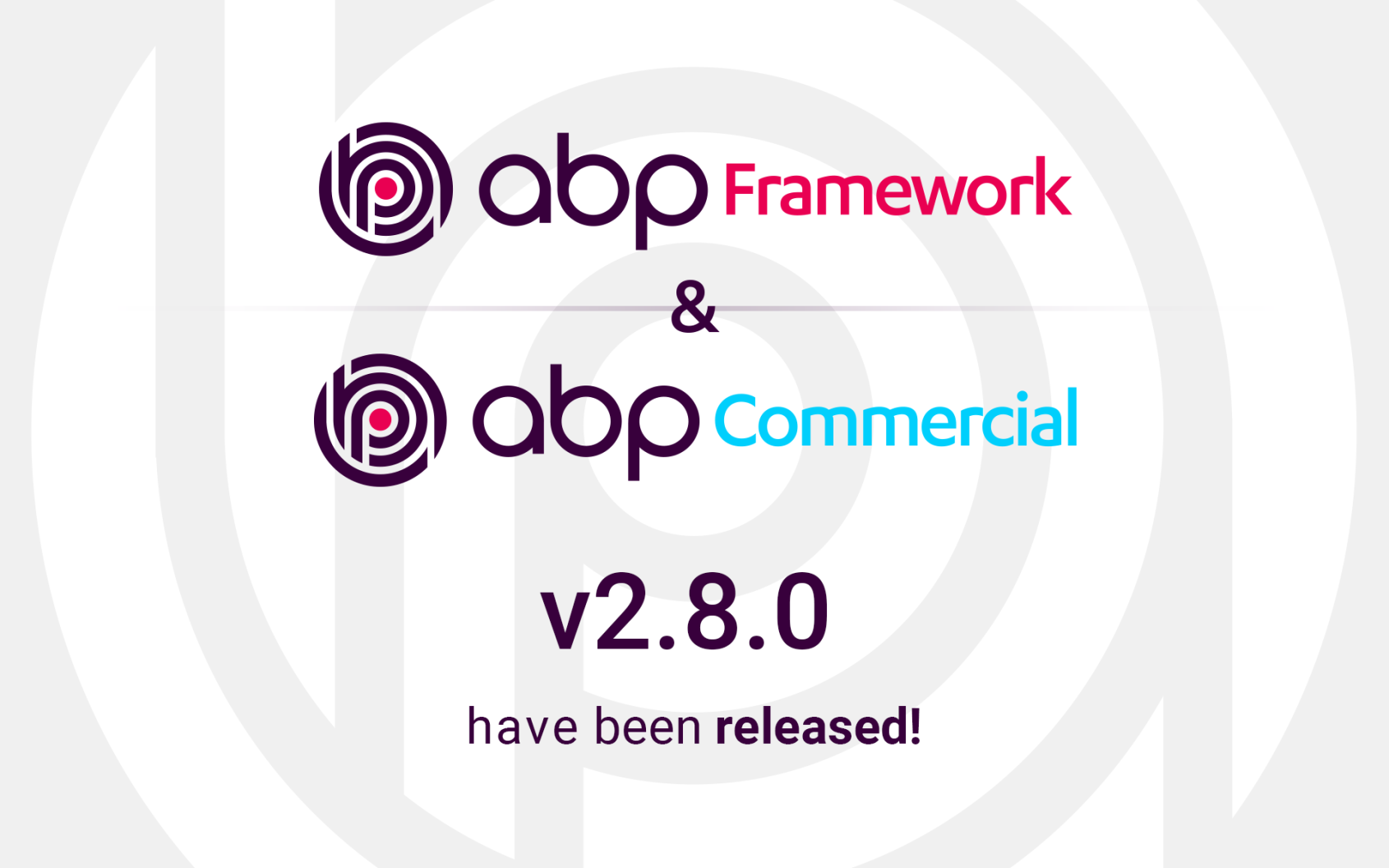 The ABP Framework & and the ABP Commercial v2.8 have been released. This post will cover what's new with these releases and the middle-term road maps for the projects.

You can see all the changes on the GitHub release notes. This post will only cover the important features/changes.

We've published a new package to integrate SignalR to ABP framework based applications.

It is already possible to follow the standard Microsoft tutorial to add SignalR to your application. However, ABP provides a SignalR integration packages those simplify the integration and usage.

We've also created a simple chat application to demonstrate how to use it.

See the source code of the application.

Use ABP CLI to create a new console application, specifying the console as the -t (template) option:

Thanks to the contribution of @realLiangshiwei for this template.

@kgamalseif has contributed a RTL implementation for the MVC UI which looks pretty fine: 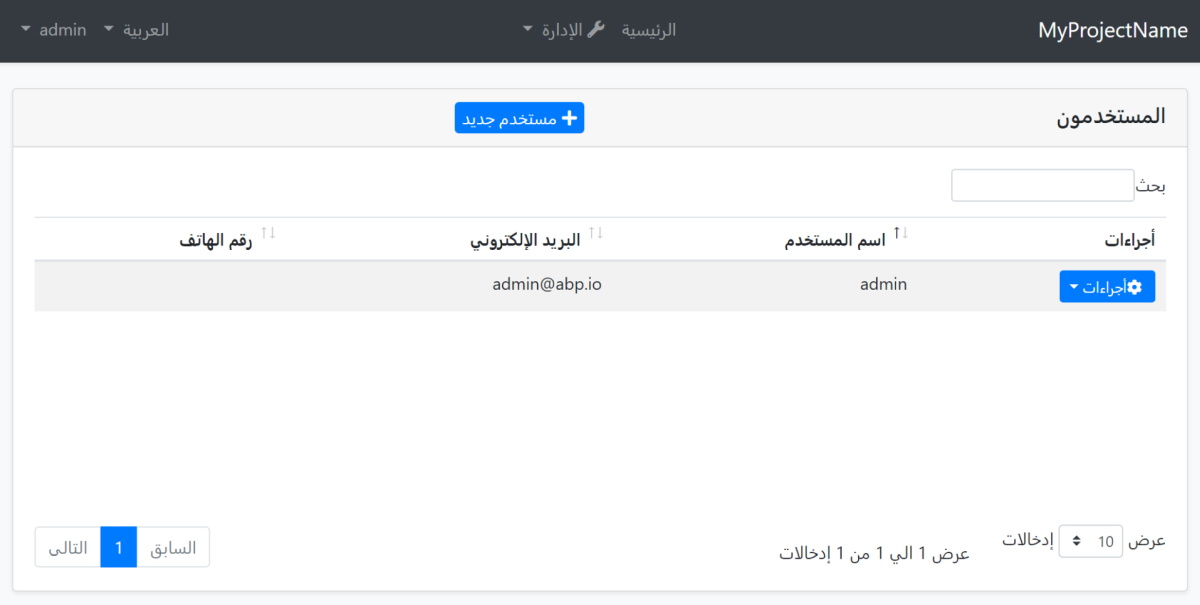 He also localized all the framework and module resources. Thanks to him for this great contribution.

Some other highlights from this release:

Old methods are marked as Obsolete and will be removed in the next major versions.

What's New in the ABP Commercial 2.8?

Example screenshots from the language management page of the ABP Commercial:

Create a demo to test all the styles in live. You can change the style from the settings page.

The first version of the chat module has been released with this version. It has only the MVC / Razor Pages UI. Angular UI is on the way.

It currently has a simple real time text messaging functionality. More features like group messaging, sending images/files are on the road map.

About the Next Versions

We publish feature releases in every 2 weeks. So, the planned date of the next feature version is June 04 and the version number is 2.9. This (probably) will be the last 2.x version and the following version will be 3.0.

Organization Unit system for the Identity module was intended to be released with 2.8, but unfortunately we couldn't be sure about the stability of the feature, so deferred it to the 2.9.

We planned to work on a gRPC integrated example application. Then we will plan to create gRPC endpoints for all pre-built modules and to the startup templates. We want to use these endpoints with the new planned Blazor UI option (there is a huge demand on a Blazor UI, we know). It doesn't mean that we'll finish the whole work in 3.0, but we are starting and will continue in 3.0+ versions.

We see that the people using Oracle with EF Core has some pains, independent from the ABP Framework. Because there is no stable & free Oracle provider for EF Core 3.1 yet. We only see the Devart has created a paid package.

@ebicoglu has created a gist to demonstrate how to use it. We planned to work on an integration package to make it even easier.

We are working to create an API documentation for the framework and build a CD pipeline to automatically publish it in every new release. This will make easier to explore the framework classes.

Using SignalR on a distributed/microservice system can be tricky since the services are not connected to clients and can not directly call client functions from the server. One way to overcome this problem is using a distributed message bus (like RabbitMQ) that transfers the message from the service to the web application to deliver to the client.

We will create an example application and document it to demonstrate such an architecture and how it is easy by using the ABP Framework.

While this topic is not directly related to the ABP Framework and the problem is not unique to an ABP based application, we find useful to create such guides to developers.

In parallel to the OU system in the ABP Framework (mentioned above), we are creating a UI to manage the organization units, which will be released with the 2.9.

Angular UI for the Chat Module

The Chat Module (mentioned above) only has the ASP.NET Core MVC / Razor Pages UI now. We are working to create the Angular UI for this module.

We are looking to create a File Management Module that is used to manage (upload/download) and share files between users. You may think as a very simple and lightweight Google Drive :).

Easy CRM is a sample application we've released with the previous version of the ABP Commercial. In this version, we've added more features to this application. In the next version, we will work on the Angular UI for it.

We found this application very useful since it is very close to a real world application compared to the simple BookStore example.

We are working to improve current modules, themes and the tooling to provide a more comfortable developer experience with the version 3.0.

We are frequently asked about the road map of the ABP Framework and the ABP Commercial. While we've answered to it in various platforms, with this release, we've adding road map pages for these products to their documentation:

I am also writing the road map here, in the following sections;

You can always check the milestone planning and the prioritized backlog issues on the GitHub repository.

While we will continue to add other exciting features, we will work on the following major items in the middle term:

We will work on the same items in parallel to to ABP Framework to implement them in the ABP Commercial side:

In addition, we will be working on the following items in the middle term:

While the ABP Framework and the ABP Commercial are the fundamental components of the ABP.IO Platform, we want to create a much bigger platform to bring the .NET community together to create reusable modules, share knowledge, help each other by taking the advantage of the ABP Framework's unified and standardized development model.

So, we have new *.abp.io web site ideas I want to share with the community

A platform that is used by developers/companies to publish their reusable application modules, themes, libraries and tools base don the ABP Framework. There will be free/open source and commercial products on this web site.

We are getting too many emails from companies want to hire developers or other other companies to build their products based on the ABP.IO Platform. We, as Volosoft, want to stay in the product side rather than customer basis projects. We generally lead them to experienced developers and companies.

We have a plan to create a web site to meet each side, so you can find developers for your projects or you find short or long term works to do.

Follow the social media accounts to get informed about happenings on the ABP.IO Platform:

It would be great to finish Subscription and payment system for the SaaS module so we can complete the SaaS part and create a manageable product to offer customers.

Thank you for the feedback. It is on the list of high priority items.

Great efforts and Wonderful team, Why not creating a simple user voice account (or create it as a module), to receive users and customers ideas , votes and comments, then update your roadmap based on market feedback

Just discussing a project internally with the team, like community.abp.io, to allow the community to share contents related to the ABP Framework. Also, thinking to integrate it to GitHub issues to allow everyone to vote features.

Simply Awesome..!! Great work.. please keep in mind Calendar, Email App, Invoice Template, Scrum Board, and Chat App (Private, public, group, voice and video conferencing). Like in DNN and Kentico ecosystem, configurable themes are recommended. Still I did not see any theme system like in PHP Laravel framework. I hope my suggestions will be considered and helpful to others. Thanks a lot..!!