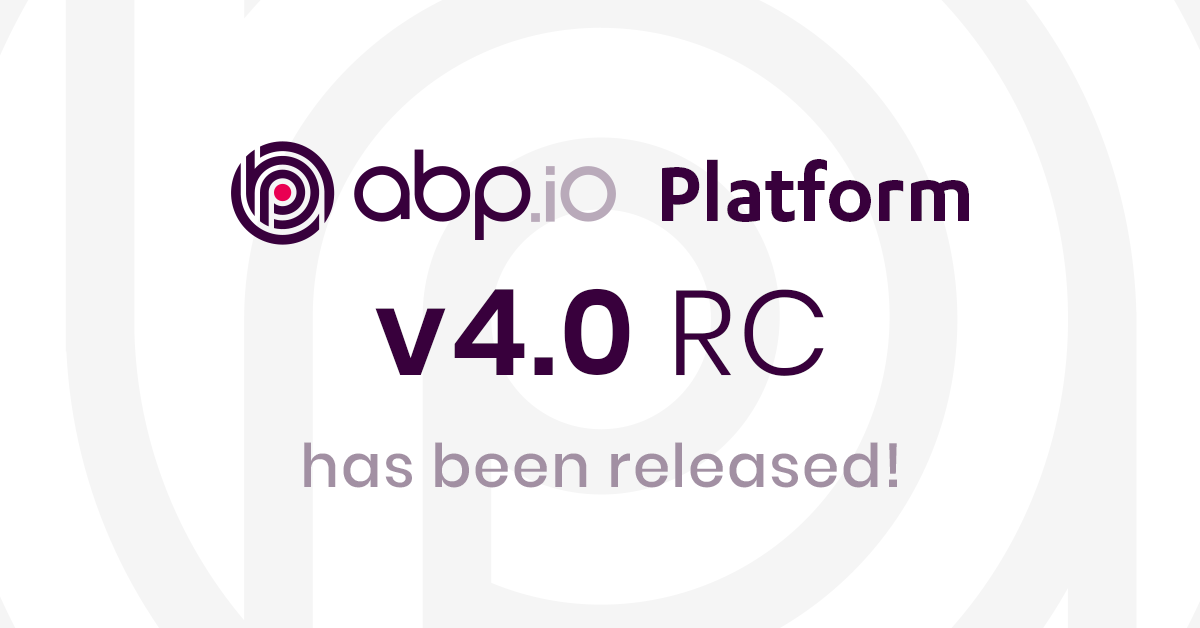 Today, we have released the ABP Framework (and the ABP Commercial) 4.0.0 RC that is based on the .NET 5.0. This blog post introduces the new features and important changes in the new version.

Get Started with the 4.0 RC

If you want to try the version 4.0.0 today, follow the steps below;

or install if you haven't installed before:

See the ABP CLI documentation for all the available options.

You can also use the Direct Download tab on the Get Started page by selecting the Preview checkbox.

The version 4.0 comes with some major changes including the migration from .NET Core 3.1 to .NET 5.0.

We've prepared a detailed migration document to explain all the changes and the actions you need to take while upgrading your existing solutions.

What's new with the ABP Framework 4.0 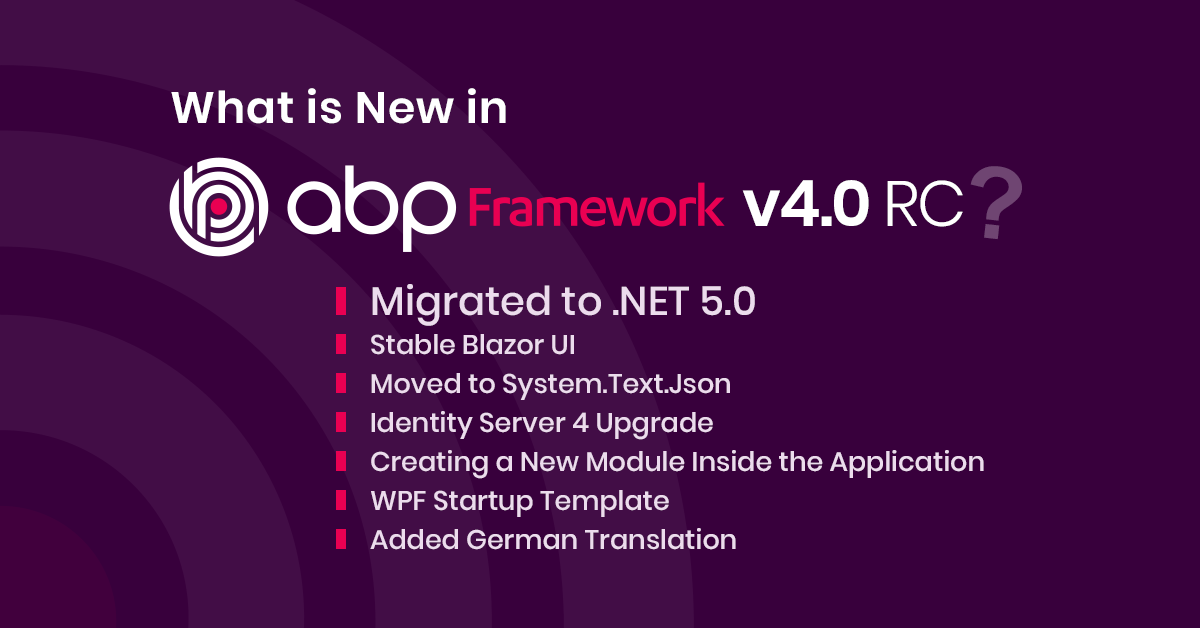 The Blazor UI is now stable and officially supported. The web application development tutorial has been updated based on the version 4.0.

Introducing the abp bundle CLI command to manage static JavaScript & CSS file dependencies of a Blazor application. This command is currently used to add the dependencies to the index.html file in the dependency order by respecting to modularity. In the next version it will automatically unify & minify the files. The documentation is being prepared.

There are some other changes in the startup template and some public APIs. Follow the Migration Guide to apply changes for existing solutions that you're upgrading from the version 3.3. While we will continue to make improvements add new features, we no longer make breaking changes on the existing APIs until the version 5.0.

A lot of minor and major improvements have been done for the Blazor UI. Some of them are listed below:

Creating a New Module Inside the Application

ABP CLI has now a command to create a new module and add it to an existing solution. In this way, you can create modular applications easier than before.

Example: Create a ProductManagement module into your solution.

Execute this command in a terminal in the root folder of your solution. If you don't specify the --add-to-solution-file option, then the module projects will not be added to the main solution, but the project references still be added. In this case, you need to open the module's solution to develop the module.

See the CLI document for other options.

Introducing the WPF startup template for the ABP Framework. Use the ABP CLI new command to create a new WPF application:

This is a minimalist, empty project template that is integrated to the ABP Framework.

Thanks to the contributors from the ABP Community, the framework modules and the startup template have been localized to German language by Alexander Pilhar & Nico Lachmuth and to Spanish language by Jose Manuel Gonzalez and Washington Acero M..

What's new with the ABP Commercial 4.0 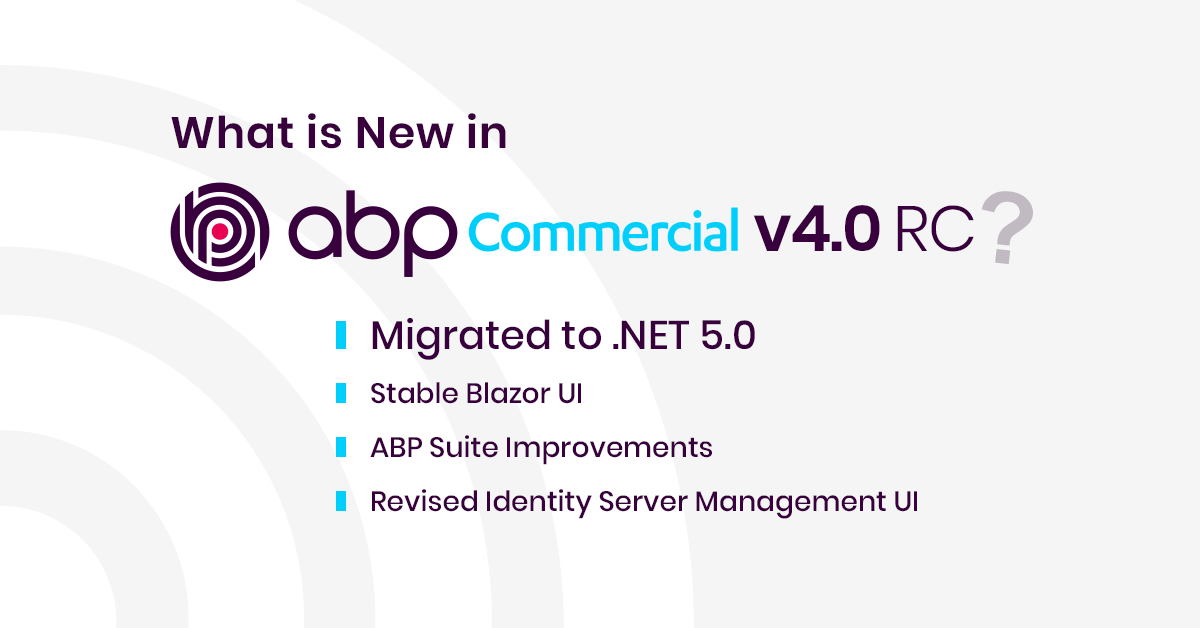 The Blazor UI for the ABP Commercial is also becomes stable and feature rich with the version 4.0;

While creating create/edit modals with a navigation property, we had two options: A dropdown to select the target entity and a modal to select the entity by searching with a data table.

Example: Select an author while creating a new book

Completely revised the Identity Server Management UI based on the IDS 4.x changes.

About the Next Release

The next feature version, 4.1.0, will mostly focus on completing the missing documents, fixing bugs, performance optimizations and improving the Blazor UI features. The planned preview release date for the version 4.1.0 is December 10 and the final (stable) version release date is December 24.

Follow the GitHub milestones for all the planned ABP Framework version release dates.

Please check out the ABP Framework 4.0.0 RC and provide feedback to help us to release a more stable version. The planned release date for the 4.0.0 final version is November 26.